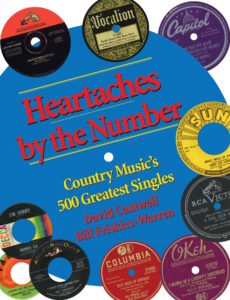 Today’s playlist (below) takes its inspiration from Heartaches by the Number: Country Music’s 500 Greatest Singles by David Cantwell and Bill Friskics-Warren.

Heartaches by the Number tells a popular, and decidedly populist, history of country music. Its interwoven essays showcase the music’s myriad roots and influences: stringband stomps and western swing, hillbilly boogie and honky-tonk, the Nashville Sound and the neo-traditionalist movement, plus everything from blues and bluegrass to rockabilly, country-rock, and soul.

An excerpt from the #1 entry in Heartaches by the Number, for Sammi Smith’s 1970 recording of “Help Me Make It through the Night,” showcases Cantwell and Friskics-Warren’s thoughtful sensibility toward the music:

“Help Me Make It through the Night” had been recorded several times before [Sammi] Smith’s version appeared. Bill Nash first cut the song in 1969, and Ray Price included an inexplicably jaunty take on the ballad for his For the Good Times LP. All of these versions had been made by men because [Kris] Kristofferson had written [the song] from his male viewpoint. “Take the ribbon from your hair” was an opening line that in the wrong hands could have come off more than a little creepy. Smith altered the lyric to reflect a woman’s point of view; her edit, “Take the ribbon from my hair,” was simple yet significant. It not only switched the gender of the singer, it transformed the relationship of the song’s protagonist to her lover. Now, instead of a man attempting to seduce a woman by urging her to undress while he watches, it’s the woman who’s doing the seducing. One reason the single was eventually so shocking to some—Bible thumper Albert Outler decried it as an example of “defiant hedonism”—was that, at a moment when the women’s movement was only just starting to make its way into mainstream consciousness, Sammi was advocating for a woman’s right to initiate sex. And to enjoy it.

But what’s most remarkable here is the way that—thanks to Smith’s revision, her performance, and the music surrounding it—the single is only superficially about sex at all. Kristofferson’s sensual imagery—a woman’s hair tumbling upon the bare skin of the lover who then lies at her side—sets us up for a seduction. Instead, it embraces a deeper feeling, the fear that one cannot make it alone.

Bonus: Read an interview with David Cantwell from 2017 in which he talks about what has changed (or not) about country music since he and Bill Friskics-Warren wrote Heartaches by the Number a decade and a half ago.