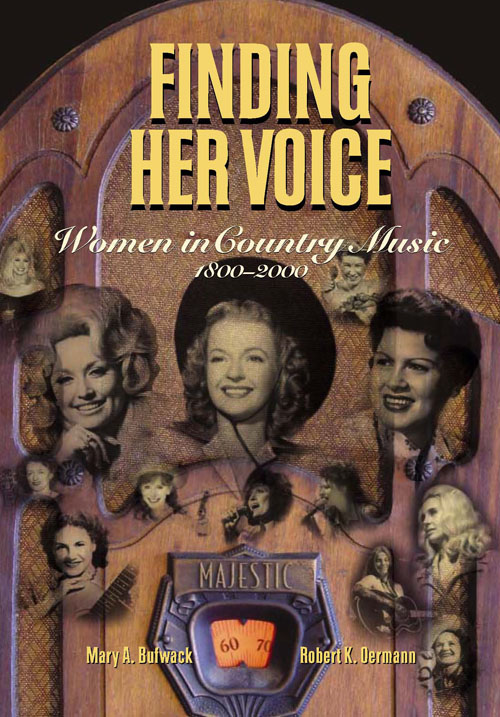 Today’s playlist takes its inspiration from Finding Her Voice: Women in Country Music, 1800–2000 by Mary A. Bufwack and Robert K. Oermann.

Finding Her Voice tells the stories of the female artists who have shaped country music for over two hundred years, from country’s earliest pioneers to its greatest legends. Through interviews, photos, and primary texts, the authors weave a vast and complex tapestry of personalities and talent. As Bufwack and Oermann discuss in their Introduction to Finding Her Voice, the story of women in country music is a very dynamic one:

The story of women in country music is a window into the world of the majority of American women. It describes poverty, hardship, economic exploitation, sexual subjugation, and limited opportunities. Sometimes it is self-defeating and reactionary, painful and despairing. But it also contains outspoken protest and joyful rebellion, shouts of exaltation and bugle calls of freedom. There is humor as well as sadness here, victory as well as heartache. The history of women’s country music reveals a rich vein of positive images, self-assertive lyrics, and strong female performers.

The position of women in country music has been the subject of ongoing discussion in American popular culture in recent years. An especially conspicuous example came in 2015 with the “Tomato-gate” controversy, when radio consultant Keith Hill, in an interview with the trade publication Country Aircheck, advised country radio stations to limit their airplay of songs by female artists:

If you want to make ratings in country radio, take females out. The reason is mainstream country radio generates more quarter hours from female listeners at the rate of 70 to 75%, and women like male artists. … Trust me, I play great female records and we’ve got some right now; they’re just not the lettuce in our salad. The lettuce is Luke Bryan and Blake Shelton, Keith Urban and artists like that. The tomatoes of our salad are the females.

Female country music artists such as Martina McBride, Miranda Lambert, and Jennifer Nettles spoke out against Hill’s comments, and groups like Change the Conversation and Song Suffragettes amped up their efforts to fight gender inequality in the country music industry. But the cultural conversation about disparities continues—as the Tennessean reported in 2018, three years after Tomato-gate, there were even fewer women on country radio than in 2015.

The release earlier this month of the debut album of the Highwomen—a supergroup made up of Brandi Carlile, Amanda Shires, Maren Morris, and Natalie Hemby—is the latest example of a creative and commercial effort to address gender disparities in country music. A recent New York Times interview with the Highwomen discusses the genesis of the group:

The Highwomen concept was [Shires’s] idea, inspired by an informal research project: While on tour, she wrote down every song she heard on the radio to see if most were by men. Shires found not only that most songs played were by men, but when she called to make requests, she was directed to station Facebook pages where songs by female artists were pitted against each other in polls. Only one could win.