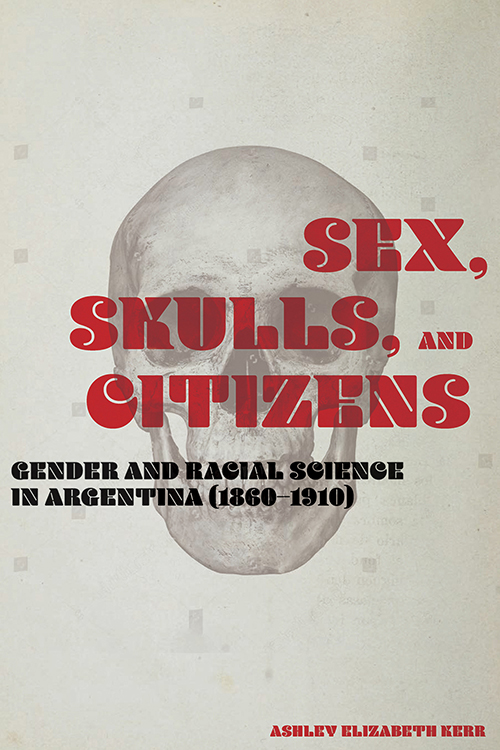 Vanderbilt UP has a new book out this week—Sex, Skulls, and Citizens: Gender and Racial Science in Argentina (1860–1910) by Ashley Elizabeth Kerr.

Analyzing a wide variety of late-nineteenth-century sources, Sex, Skulls, and Citizens argues that Argentine scientific projects of the era were not just racial encounters, but were also conditioned by sexual relationships in all their messy, physical reality.

The writers studied (an eclectic group of scientists, anthropologists, and novelists, including Estanislao Zeballos, Lucio and Eduarda Mansilla, Ramón Lista, and Florence Dixie) reflect on indigenous sexual practices, analyze the advisability and effects of interracial sex, and use the language of desire to narrate encounters with indigenous peoples as they try to scientifically pinpoint Argentina’s racial identity and future potential.

Kerr’s reach extends into history of science, literary studies, and history of anthropology, illuminating a scholarly time and place in which the lines betwixt were much blurrier, if they existed at all.

Read on for an excerpt from the first chapter of Sex, Skulls, and Citizens:

From Argentine political theorist Juan Bautista Alberdi’s maxim that “to govern is to populate” to foundational fictions such as José Mármol’s Amalia, the family appears repeatedly in Argentine nationbuilding projects of the nineteenth century.1 Statesmen such as Alberdi and [Domingo F.] Sarmiento stressed the importance of physical reproduction, relying on heterosexual pairings to create the children that would fill the spaces of the desert. In fictional texts, the family was a synecdoche for the nation, and tales of romance did the ideological work of determining the future racial and social composition of Argentina. The family literally created future citizens and became a fertile symbolic space for negotiating belonging. In this way, the private space of the family became a matter of public concern.

Argentine anthropology shared the political and literary focus on the family. As Lucio V. Mansilla, Ramón Lista, Francisco P. Moreno, and Estanislao Zeballos traversed the frontier, they keenly observed indigenous peoples’ private lives. Their upper-class creole beliefs about ideal families and sexual behavior shaped their interpretations of the cultural practices they recorded. In the anthropologists’ texts, women’s work, polygamy, and the kidnapping of sexual partners are offered not as curiosities, but as proof of indigenous racial inferiority.2 Through indigenous men’s action, women’s bodies were thus centered at the heart of savagery as a concept. Although these texts have generally been taken as authoritative depictions of nineteenth-century indigenous societies, by comparing their gendered representations to historical data and other works from the period, it becomes clear that they reflected racial anxieties, literary models, and the anthropologists’ own performance of civilized masculinity as much as empirical observation of the places and peoples they visited.

Furthermore, through the symbolic linking of the physical family and the nation, these judgments warned of the troublesome effects indigenous family structures would have on Argentine society if they were not assimilated or corrected as the tribes came under national control. The four men’s connections to governing elites, either through the sponsorship of their expeditions or through their own participation as national deputies or ministers, helped bring these private lives under public supervision. Their anthropological works laid out the justification for Argentine efforts to dismantle indigenous cultures. They also inspired several of the specific policies lawmakers implemented to do so, particularly the efforts to divide indigenous families in the 1870s and 1880s. Through these scientifically informed policy decisions, creole ideas about gender had concrete and often tragic effects on indigenous peoples’ lives.

Useful Men and Republican Mothers: Gendered Expectations and the Nation

Travelers have long been fascinated by the gender roles and familial structures of the cultures they encounter. Nineteenth-century racial scientists prioritized the study of these relations, claiming, as John Lubbock did, that they provided “instructive insight into the true condition of savages” and justification for the perceived superiority of civilized societies like those in Europe.3 The ideas the scientists brought to these encounters from their own cultures colored their observations. As theorized by present-day scholars, ethnographers in the field use abstract conceptions (experience-distant concepts) from their own cultures to understand the daily experiences (experience-near concepts) of the peoples they study, a process Clifford Geertz terms “tacking.”4 Although likely unaware of these thought processes and their implications for the accuracy of their accounts of the “true condition of savages,” Mansilla, Lista, Moreno, and Zeballos applied their own upper-class creole understandings of men and women’s differences, roles in society, interpersonal relations, and value to their encounters with indigenous peoples between 1870 and 1895.5

Like elsewhere, Argentine understandings of gender roles shifted over time and in response to pressures including religion, class, politics, and demographic transitions.6 The writers I study, like other well-to-do, urban Creoles of the time, imagined the nuclear Christian family as the basis of the Argentine nation. Their understandings of the family and men and women’s roles within it shared many similarities with Victorian culture. Families were composed of a husband and his wife, and responsibilities were clearly defined by gender. The ideal woman was the Angel in the House, responsible for protecting the home’s spiritual center, a connection strengthened by Hispanic Catholicism’s veneration of the Virgin Mary.7 She was also responsible for domestic tasks and birthing and raising children. Of course, many women could not or did not want to meet this ideal.8 Nonetheless, it remained in circulation among Argentine elites throughout the late nineteenth century, profoundly influencing large portions of the nation through upper-class Buenos Aires’s influence on politics, law, literature, science, and related fields.

Men, in contrast, moved freely through public and private spaces.9 This division of both space and power was strengthened by the 1869 Argentine Civil Code (effective 1871) which clarified the rights of the masculine head of household (patria potestad). It reiterated a husband’s authority over his wife and his responsibility to provide for her by classifying both women and children as minors.10 It also required a woman’s husband’s permission in order for her to enter legal action; buy, sell, or mortgage property; become employed; or administer her own wages.11 It further reduced her legal rights over her children and required her to obey her husband’s wishes, including with regard to her place of residence.12 And although not defined by the Civil Code, a series of Supreme Court cases in the same period ruled that a woman’s citizenship followed her husband’s, thus effectively expatriating any woman who married a foreigner.13

Both men’s and women’s responsibilities were conceptualized as exceeding intimate spaces in order to provide essential services to the nation. Good republican mothers educated their offspring to be productive future citizens.14 Juan Bautista Alberdi made this connection clear in his influential treatise, Bases y puntos de partida para la organización política de la República Argentina (1852), when he argued that a woman “organizes the family, prepares the citizen, lays the foundations of the State.”15 Masculine power and productivity were similarly tied to the success of the nation. Just as men were expected to financially provide for their wives and children, their public activities were also supposed to contribute to the common good. This expectation was often expressed through the concept of the hombre útil, or useful man.16 Both men and women’s activities thus had consequences for the individual home as well as the nation and the raza (race) that structured it.17

Argentine scientists drew upon these beliefs when studying indigenous peoples in the Pampas and Patagonia. Confident in their own representative status with regard to their race, they largely focused on observing and judging indigenous men. In the antebellum period in the United States, women were nearly absent as subjects of ethnographic inquiry and “race in this literature was largely a matter of male descent.”18 Similar patterns are seen in the Argentine literature: when it came to describing the characteristics of different indigenous societies and evaluating their potential to be civilized, women and children mattered primarily in relation to men, particularly with regard to how the men treated them.

Although the explorers studied different tribes and had varied attitudes towards the people they encountered, their shared cultural background and readings led to two dominant images of indigenous manhood. The first was characterized by a laziness and dependence on women that implied an abdication of the role of family patriarch. The second trope was of the hyper-masculine Indian, an irrational, violent, and excessively sexual being. Both characterized indigenous masculinity as threatening to the formation of the ideal creole family and thus excluded indigenous peoples in their present state from the nation. In both cases, masculinity and its relationship to savagery cannot be conceived of separately from women and their bodies.