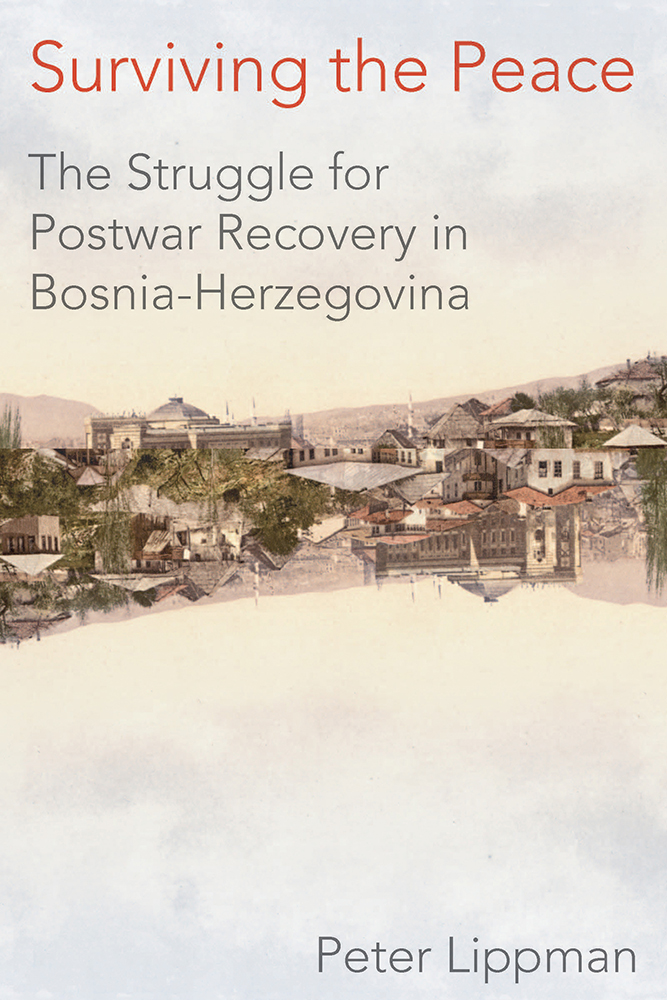 Today marks the official publication date of Surviving the Peace: The Struggle for Postwar Recovery in Bosnia-Herzegovina by journalist and human rights activist Peter Lippman.

An exemplar of long-form, on-the-ground reporting, Surviving the Peace describes two decades of postwar life in Bosnia, specifically among those fighting for refugee rights of return. Unique in its breadth and humanitarian in its focus, the book situates digestible explanations of the region’s bewilderingly complex recent history among interviews, conversations, and tableaus from the lives of everyday Bosnians attempting to make sense of what passes for normal in a postwar society.

Read on for an excerpt from Lippman’s Introduction to Surviving the Peace:

The War and the Campaigns for Recovery

Yugoslavia seemed like a fine place to live when I moved there in 1981. People had work without being overworked. There was time to spend with family and neighbors. With a Yugoslav passport it was possible to travel east and west with minimal visa requirements, and people generally had the income and vacation time to do so. They went abroad, and they were happy to return home.

But dark forces lurked behind this apparently pleasant scene, and just a few years later the Yugoslav federation was in a state of violent disintegration. The thousand-year history of Bosnia was thus punctuated in a most dreadful way by the 1992–1995 war, which changed the face of the country forever. By far, the most extensive bloodshed took place in Bosnia-Herzegovina.

Many books have been written about that war, but the history of Bosnia did not end in 1995. A struggle is ongoing in Bosnia-Herzegovina, waged by ordinary people against great odds—a struggle for freedom of movement, for equal opportunity in the pursuit of a decent life under peaceful conditions, for a government free of corruption, for the restoration of good relations among the diverse ethnicities, and for justice.

This book is a portrayal of postwar life in Bosnia. It is meant to be more in-depth than the occasional newspaper article and more accessible than the scholarly writing currently available. It is the result of more than two decades of close observation of grassroots human rights campaigns and the struggle for recovery in Bosnia-Herzegovina.

My curiosity about other cultures led me to settle in Yugoslavia in the early 1980s, a decision that laid the foundation for a lifelong attachment to the language, the country, and the people.

Though my interest began with ethnographic exploration, my activist background led me to get involved in a different way when the country was broken up by war ten years after my first visit. In 1993 I helped put together an organization in Seattle to sponsor a family of refugees who had fled the war. I quickly became close to that family, listening to their stories and trying to imagine the troubles they had lived through.

After the war ended, I went to live in Bosnia for two years. At the beginning of my stay, I volunteered with a small relief agency in Tuzla. There I had the eye-opening experience of meeting survivors from Srebrenica. Looking into the eyes of a widow who has lost all the men in her family is a searing experience.

I also visited Prijedor just as refugee return to that municipality was beginning. I witnessed the transformation of the mostly Muslim town of Kozarac from rubble back into a lovely community facing new, post-return problems.

As I sat with return leaders Emsuda and Osman Mujagić in the garden of one of the few homes left intact in Kozarac, the couple expressed their determination to me. “We will rebuild Kozarac,” Emsuda said. “We built this town together before the war, too. We didn’t wait for the government to build our roads and our water supply system. We will do it again.”

Osman added, “To us, Kozarac is beautiful, even if it is ruined.”1

I wound up my two-year stay working for the Advocacy Project (a Washington, DC–based human rights organization2) as a field researcher on grassroots human rights campaigns. The movement for refugee return, described in the opening chapters of this book, was the first widespread campaign for recovery in postwar Bosnia-Herzegovina. It lasted for six or seven years and was followed in many return communities around Bosnia by an ongoing campaign against ethnic discrimination. In some places this discrimination still amounts to apartheid.

Witnessing the Struggle for Recovery in Bosnia

The main part of this book is a description of the cards that were dealt ordinary Bosnians at the end of the war and a depiction of how those people have responded. The whole story is full of detail, and I can recount only a small part of it.

After four chapters that illustrate the larger postwar situation and discuss the refugee return movement, I concentrate on two places where I have spent significant time over the years: Srebrenica and Prijedor municipality.

In general, if people have heard of Bosnia-Herzegovina, they have heard of Srebrenica—and too often the story stops there. Srebrenica deserves attention, of course. But along with the history of the genocide that was committed there, Srebrenica has also become a place where people are fighting for change. Prijedor is another such place, one where there was above-average refugee return after the war, and it has been the location of some of the most concerted struggles for justice under apartheid-like conditions.

I regret that I am not able to give more space to Stolac, Mostar, Goražde, Bijeljina, Višegrad, and many other places in Bosnia where I have spent time and where people have generously shared their experiences with me. In those places I have met people who are likewise fighting for recovery under particular, local conditions of division and separatism; they all deserve to have their stories told.

During the war, over two million people were displaced or made refugees.3 Somewhat over a million of those people returned home from abroad or from internal displacement, but the return movement was not successful in recreating a multiethnic population in any part of the country. In the places where there was significant return, such as the municipalities of Prijedor, Zvornik, and Mostar, the different ethnicities have lived alongside each other rather than with each other. Nearly one hundred thousand people remained internally displaced as of 2017,4 with some seven thousand of those still living in collective centers.5

The fate of Bosnia-Herzegovina as a recovering nation and a functional state, one that protects and nurtures its people, is as uncertain as ever. But while corruption and division have been pervasive over the years, it has been possible to view the response of Bosnians with hope, simply because, as I will detail, there has been a recurring, courageous response.